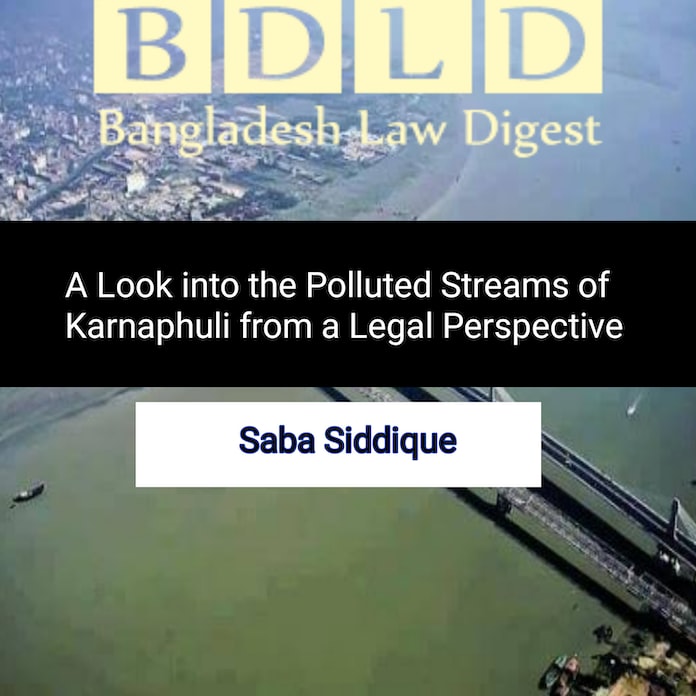 A recent survey conducted by the researchers at Bangladesh University of Engineering and Technology revealed that the Karnaphuli riverbed has a thick layer of polythene and plastic waste stretching from 2 to 7 metres in addition to the waste floating on it, as a result of which the dredging equipment has accumulated 25 feet highpile of polyethene and hard waste at the bank of previously glorious Karnaphuli river.

Karnaphuli Capital Dredging Project was launched in 2011. The Chittagong Port Authority (CPA) had initiated the dredging project in May 2018 to restore navigability of the Karnaphuli. Work on the capital dredging project was stopped in early 2020 due to random siltation, piling up of polythene and plastic waste on the river bed and the COVID-19 pandemic. CPA resumed dredging in April 2020 with locally made Grab Cutters. 47% of the dredging task has been done till date although regular dredging is being obstructed by polyethene and other waste as per CPA’s claims. Polythene bags dumped in 37 canals of the city eventually end up in Karnaphuli river. With the continuous disposal of waste by the industries and inhabitants, the likelihood of a fruitful outcome from the dredging is bleak.

Chittagong City Corporation and Chittagong WASA are tasked with the overall waste management of the port city, with specific responsibilities for each entity. The City corporation claims that it is Chattogram Development Authority’s (CDA) responsibility to clean up the canals of Karnaphuli. Although the CDA has initiated the project, Bangladesh Army has been implementing it. Due to lack of coordination, manpower and infrastructural limitations among the assigned authorities, the waste disposal system has become dysfunctional.

Several researches have been conducted to quantify the impacts of contamination of Karnaphuli river. The mean concentrations of heavy metals are higher than World Health Organization standard 2011, United States Environmental Protection Agency 2009 and Bangladesh Standard for drinking water. Yet these substances are being incorporated in our food chain.

Another study which was conducted in Kalurghat Heavy Industrial Area, situated on the bank of Karnaphuli, shows that most of the industries there don’t have Effluent Treatment Plants (ETP). Some industries’ ETPs are not operating or the capacity of ETP is inadequate with respect to the effluent. Thus, standard quality of disposed effluent isn’t being maintained as there is no central ETP in the area either.

According to rule 7 of the Environment Conservation Rules 1997, industries within the orange and red categories are required to submit reports on their respective Environmental Management Plans (EMP) and layout of their ETPs for an Environmental Clearance Certificate (ECC) to be issued, without which no industrial project can be established. ECC is to be renewed every year by orange and red industries by applying with the required documents along with EMP and ETP reports, and section 16 of the Bangladesh Environment Conservation Act (BECA) describes failure to perform these duties as corporate environmental crime, yet the industries without these mandatory arrangements are running and polluting the river with untreated effluent without facing any consequences.

The first master plan formulated by the Government in 2016 to restore the navigability and check the pollution of the rivers has identified reasons for water pollution in Karnaphuli. The master plan placed 31 short-term, 14 medium-term, and five long-term recommendations such as suspending productions until the factories set up ETP, implementing a Sewage Treatment Plant on an emergency basis, monitoring the hill cutting in the city, checking oil seeping from the vessels in the river, etc. The National River Conservation Commission Act 2013, section 12 empowers the Commission to make recommendation to the Government regarding water pollution. In 2019, the Commission was declared to be the legal guardian of the rivers by a landmark decision of the High Court Division (HCD) of the Supreme Court. Despite the formation of such supervisory entities, there seems to be no incentive for actions to hold the concerned authority accountable or the polluters liable for disposing hazardous substances in the river.

One of the latest additions to domestic environmental laws, the Bangladesh Water Act 2013, section 28, provides that water pollution shall be dealt with the BECA 1995. But both of these acts have the same drawback of accessibility to the court without prior authorization. The National Water Policy in article 4.8 states monitoring of effluent disposal as well as polluters being required to pay for the cleanup of water- body polluted by them. The enforcement mechanism of all these existing legal frameworks is not effective enough to prevent water pollution despite the severity of this issue.

Contrary to the existing laws, the judiciary has played the most significant role in conserving the rivers of Bangladesh. Rivers Buriganga, Turag, Balu and Shitalakhya have been declared ad Ecologically Critical Areas in 2009 through the directions of the HCD in another writ petition alleging encroachment into the area. Directions were given to take immediate, effective measures to stop dumping industrial wastes, sewers, contaminated substances in the river Burigonga which had previously lost its natural color and character. In a writ petition, the government, represented by the Deputy Commissioner of Chittagong, as well as the concerned Ministry were held equally duty bound to preserve and protect the Karnaphuli river and its banks and to stop and evict all unauthorized constructions and encroachments. The landmark judgment of Turag River case has given the status of legal person to all the existing rivers of the country.

Judicial activism is preferred over conventional litigation in environmental matters because it is speedy and offers direct access to the apex court of the country. But formulation of environmental laws is in vain if the effective measures are implemented only when the judiciary gives directions. Current regulations to check pollution are inadequate, lack clarity and are deficient in allocating responsibility to the concerned authorities. Addressing the gaps in the existing laws, ensuring accountability and coordination of the agencies of the Government are the most significant steps to reduce pollution in Karnaphuli.

Decentralizing the wide and discretionary power of the Director General of the Department of Environment, providing accessibility to the Environment Court and participation of the general public in environmental matters could shed more light to the gravity of the situation and redress the issues arising from contamination. Instead of the broader framework of BECA 1995, water pollution should be dealt with by a particular authority and a distinct comprehensive piece of law. Besides that, economic instruments such as emission taxes, water effluent charges could be a great step and applying polluter plays principle.

As for polythene and plastic bags, these are cheap, used once and get deposited on the water bodies. To combat plastic pollution, Bangladesh had banned use of plastic bags in 2002 but it could not be implemented. Therefore, to discourage and curb the use of plastic, customers should be charged for plastic packaging at shops. In Japan, this step has resulted in 95% refusal rate of customers in accepting plastic packaging from supermarkets. Countries like Germany, Japan have incentivized collection of plastic bottles for money. Besides, biodegradable substitute for plastic bags like jute based “Sonali” bags exist now. Commercial production and mainstreaming of this can reduce long term hazard of plastic contamination. Ship breaking, oil spillage and lack of Sewage Treatment Plants must be addressed to conserve the biodiversity of the Karnaphuli river.

Bangladesh has ratified the Convention on Biological Diversity and endorsed Rio Declaration and Agenda 21. Hence, it is required to make efforts for conserving the bio-diversity of the wetlands and ensure environmentally sound management of hazardous waste. In compliance with these international commitments, Bangladesh has formulated regulations and numerous institutions endowed with the duty of implementation of those. Due to less stringent nature of penal provisions, weak enforcing mechanism and poor governance conditions, the rivers of Bangladesh are in dire condition. It is not ideal that despite having so many local and executive authorities, the pollution of rivers, that are essential to our existence, is only checked through judicial activism. it is incumbent upon the concerned authorities to devise an exhaustive approach to stop such pollution along with raising awareness among mass people about the severity of the pollution of Karnaphuli and ensure harmonious coexistence of ecological protection and economic growth.

Cite this article as: Saba Siddique, 'A Look into the Polluted Streams of Karnaphuli from a Legal Perspective' (Bangladesh Law Digest, August 2, 2021) <https://bdlawdigest.org/a-look-into-the-polluted-streams-of-karnaphuli-from-a-legal-perspective.html>

A Legal Analysis on Right to Food and Duty of the...